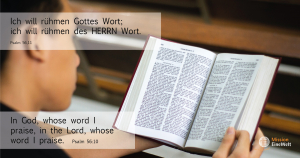 That good thing which was given to you keep safe, through the Holy Spirit which is in us. II Timothy 1:14

Tears can also be a revelation. At least, that is what they say about Rabbi Sussiah. He is said to have been on his deathbed when he began to cry. Rabbi Sussiah’s disciples then tried to comfort him. They praised the deeds he had done in his life. Had he not been a Moses to them as a teacher? Yes, a father like Abraham?

Whether it all happened that way is not so important. Not even the names as such agree completely in the different versions of the story. The main thing is that they are biblical figures that everyone knows. Moses and Abraham. David or Elijah. Sussiah alone is really decisive. Because he is mentioned twice in the story. First, Sussiah is introduced as the rabbi who weeps.

And then at the end – at the resolution – it is said:

Why have you not been Sussiah? The discovery of being addressed by one’s own name – that is in the tradition of the Hebrew Bible: the Word of God. „It’s about you!“ This is great and powerful. A precious good worth preserving.