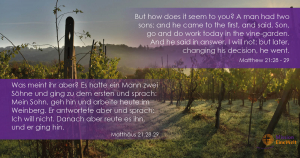 But what think ye? A man had two sons; and he came to the first, and said, Son, go work today in the vineyard. And he answered and said, I will not: but afterward he repented himself, and went. Matthew 21:28, 29

These are the topics of those stories in the Old Testament that mention brothers. Jacob and Esau. Ishmael and Isaac. Cain and Abel, and so on: „Stories of brothers“ are a metaphor for the fact that kinship is no guarantee of peace and that similarity does not mean equality. On the contrary.

In his parable, Jesus gives a special twist to this kind of storytelling. The brothers are nameless, and yet the difference between them is marked in a distinctive way. One of them says, „I don’t want to!“ when asked to work in the vineyard by his father.

How modern that sounds! How individualistic! Parents with children in puberty immediately feel reminded of them: „I don’t want to!“

But one or the other may also think of a fellow human being who shirks responsibility for the world. Who may even openly and clearly say, „I don’t want to!“

Surprising how Jesus ends the parable. The brother who said, „I don’t want to,“ is the one who then does it.

Maybe defiance and refusal are not the final chapter of the matter.

After all, anyone who has ever been a child knows what it means to gain an insight. Doing the right thing, even if you were against it before. That’s how responsibility comes to life. Hopefully.